Boozhoo, aaniin, everyone! Chi miigwech, thank you, to Kim Parker and Tricia Ebarvia for inviting me to participate in #31DaysIBPOC! 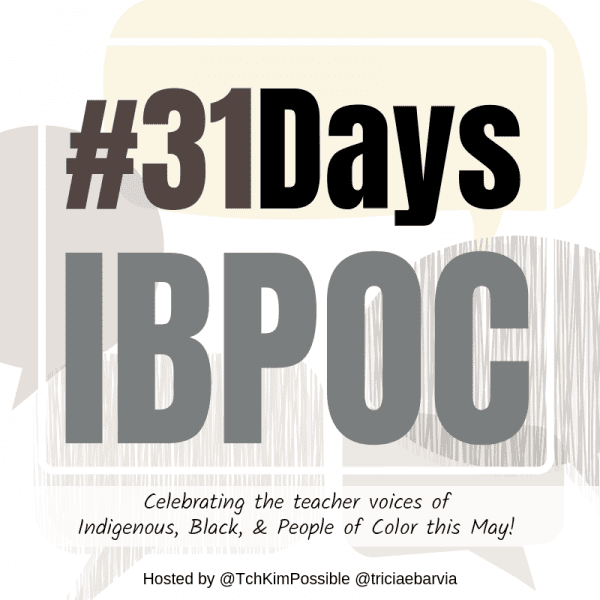 I grew up in Mankato, MN. Mankato is in Blue Earth County in the southern part of the state. It was a solid and safe place to grow up. 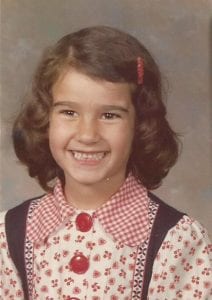 Me, back in the day

But also in this solid and safe place there was a surface understanding that those who lived in the surrounding Mankato area did not mention, did not talk about, nor brought in the story of Native American Mankato. More on this soon~

Promoting respectful Native American representation in literature is where my fire lay now; yet this flame was nearly extinguished almost 35 years ago by the deluge of the wave of my first encounter, for the first time as a child, being mocked and humiliated for my love of Native American literature, and for what I interpreted then, for being a Native person.

This was the only time, due to various circumstances, that I was able to attend camp. To alleviate the feelings of being homesick I brought my favorite book, I don’t recall the name exactly, but it was a Winter’s count tale, which is a traditional Lakota pictographic retelling of a battle or hunting story. This book was read over and over by me and my mother, yet I still found something new each time I read it–a phrase, a drawing, a lesson. After returning from camp dinner one night I opened the cabin door to find my bag had been riffled through and on the bunk were my cabin mates–one girl held my book and was, in a melodramatic voice, reading my book in a stereotypical “Injun talk” voice. My bunkmates were holding their sides in laughter. I made excuses of why I brought the book, and hid it away for the rest of camp–along with my identity as a Native person for many years, when I walked in and about school settings. After I returned home from camp, I gave my treasured book away, and hid my Native identity for many of my school years. I wish I could remember what I did with this book.

This experience motivated me when I became an adult. I came to realize that too many Native American schoolchildren must also hide from their identity while having to endure biased, racist, and stereotypical literature taught by too many teachers– even today. My own children have brought home books with phrases claiming, “…those dirty Indians…”, “…the squaw brought him food…”, and even false notions that “Indian people did not know how to tell time.”

Now I study how nonNative teachers can create a ripple effect to open minds and hearts to appreciate Native literature, so no child needs to be ashamed of seeing books which reflects themselves. Students of color make up 45% of the population in public schools yet only 17% of U.S. public school educators are people of color (Achinstein & Ogawa, 2012, p.2). Therefore, since the majority of teachers in the United States are white, these teachers must learn how to respectfully implement diverse curriculum.

Back to my childhood…(trigger warning: images of scaffold).

Mankato, MN, my hometown, is the site of the largest mass execution in US history.  I spent 12 years in the Mankato public school system and not once was this fact ever taught: On December 26th 1862, 38 Dakota men were hanged on a scaffold in the Town Square just off the Minnesota River bed. No school taught me that. No teacher share this past tragedy. No textbook held this between its pages.  It was my parents who always brought in books and images about this story to our home.  The town of Mankato did not want to recognize this fact. It wanted to sweep the history under the rug.

However I was not able to hold and shape the fact that as I grew older, I realized there were none, if any, people in Mankato who would recognize or admit to the fact of what happened on that site. On the very site of the death of the 38 Dakota men sits a building that I spent so many years of my childhood reading into new worlds and into the past. It was the Mankato Public Library (sometimes referred to as The Blue Earth County Library) which literally and physically covered the shameful history of Mankato. 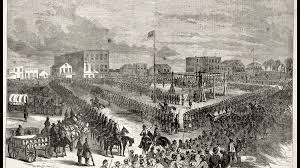 In this library I spent hours combing through the children’s section searching for books and images and stories that would reflect what I knew from spending time on the Turtle Mountain Reservation, ND, with my grandparents/relatives. I looked for Indigenous stories that I could relate to: the smell of the frybread; the sound of the crackling commodity oil popping; and the children tip-toeing in to steal the golden fried treats as my grandmother set them in a bowl next to her to cool.

Sometimes I would find a book that I could recognize images; yet the 1970s had scant stories that told me there were other brown children like me in the world.

But what I remember most at my childhood library was navigating the library space with a larger-than-life image of a white woman with gray hair wrapped up an old fashioned bun. She stared down at me as I walked into, and as I left, the children’s wing of the Mankato Public Library. I didn’t know who this woman was at the time, but later found out she was a local famous author, Maud Hart Lovelace. There is a MN book award named after her. 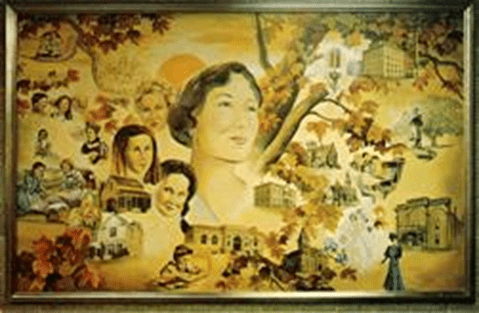 From the Betsy-Tacy books by Maud Hart Lovelace and Mankato, Minnesota, at the turn of the century. Painted by Marian Anderson, the mural hangs in the Blue Earth County Library in Mankato.

This image was a floor-to-ceiling rendering of the famous author and her stories which were set in and around Mankato. The ceiling lights spotlighted this woman and I knew even then, that lights- bright lights- meant this person is important.

But I never connected to her books; nor her stories.

I also knew, there was something just a few yards away, in the shadows literally, by a small fountain. An object by itself. It was a small plaque.  I was slight enough, and I noticed things closer to the ground. This plaque was probably no more than ten inches tall attached into the side of a small rock.

Dakota (Sioux) Memorial Plaque. On the plague: The last act of the Minnesota Dakota (Sioux) War took place here in Mankato on December 26, 1862 when thirty-eight Dakota Indians died in a mass execution on this site.

But I knew even then, that this plaque, shadowed in the dark crevice of the library, was understood to stay hidden in my hometown’s history as well. Out of sight, out of mind.

Some of my earliest memories are of visiting this library and running in the middle the larger-than-life mural and, vividly recall tiptoeing around the hushed fact that on that same spot was the largest mass execution in our nation’s history.  It is to those voices, that history silenced, which propels my current Native American writing and passion for supporting respectful representation of Native literature into classrooms.

I call myself an “Introverted activist” using my platforms. Why do I continue to do this work?

If all students, both Native and nonNative, begin to have a deep respect and joy for Native-authored texts, then no future young Indian girl, like myself, will have to recede away from her identity by being ridiculed for loving a book which reflects herself.  Dr. Bishop began many years ago speaking about literature being a way to offer a window, mirror and sliding glass door to children. And so, this is all of our charge.

Today, each time I pass a used book store I look for my “Winter counts” book, believing that it will return to me, swirl back, so that, in what some Native people believe, I may complete the circle and return once again to my first beloved Native book.  Educational settings were, and still are, the site of Native people’s assimilation and attempted decimation through Native American boarding schools, and therefore today’s educational sites, must begin to be the site of Indigenous self-determination and trauma healing (Grande, 2004; Kovach, 2009), beginning with the inclusion of Indigenous-created representations in literature. First Nation scholar, Margaret Kovach, reminds us that for Native peoples, “work begins, and ends, with story.”

Because now, we must tell our own stories, instead of having others tell it for us Native people- and getting it horribly wrong.

This blog post is part of the #31DaysIBPOC Blog Challenge, a month-long movement to feature the voices of indigenous and teachers of color as writers and scholars. Please CLICK HERE to read yesterday’s blog post by Shea Martin (and be sure to check out the link at the end of each post to catch up on the rest of the blog circle).

Dawn Quigley, citizen of the Turtle Mountain Band of Ojibwe (ND), taught in K-12 for 18 yrs and now is an asst prof in a university Education Dept. She also is an author: Apple in the Middle (NDSU Press), Native American Heroes (Scholastic Books) and the 2021 forthcoming Jo Jo Makoons Native American chapter book series from Heartdrum|HarperCollins.